The Z7000-90 stacker is used to stack crushed overburden to a dump.
The stacker consists of a substructure (steel structure connecting three crawler twins of the undercarriage). The slewing superstructure with the tower and the counterweight boom with a counterweight are mounted on the substructure. A discharge boom equipped with a belt conveyor is hinged on the superstructure.

* Distance between slewing axis of the machine superstructure and axis of a reversing drum of the belt conveyor.

** Depending on base load-bearing capacity 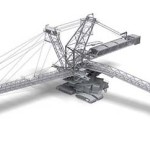 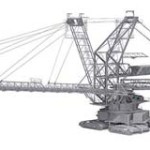